The Next Revolution is upon us and it is in the form of iPhone 4’s Siri. Siri is a new technology which assists users with guidance and a female’s friendly voice! Ask “her”, “I want to make a reservation at a Chinese restaurant somewhere in Back Bay” and she responds softly with “John, I found four.” What’s not to love?

Is this “The Next Great Thing?” Absolutely – I’m convinced! If predicting the future is worth anything (considering how inaccurate making predictions has proven in the past) – the next revolution it’s all about Relationships with you laptop, iPad, and iPhone/Android/Blackberry.

Siri incorporates voice “understanding” with a woman’s warm soft touch. And, not surprisingly, it evokes emotions – especially from men. It has been noted that some men have even proposed to Siri. Others faintly “hear” their mother’s voice gently whispering “I love you”. Women are not as struck – they report hearing a congenial and cooperative voice. 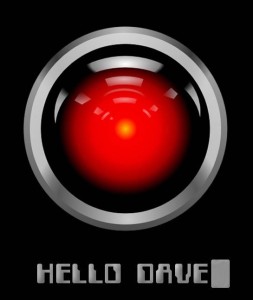 The tech companies are obviously avoiding the mechanized voice of HAL (the computer in Stanley Kubrick’s 2001: A Space Odessey. After all, the HAL 9000 was a bit paranoid (felt unloved actually) and killed all but one of the the crew of the spacecraft.

But what about this ‘relationship’ thing I was discussing? Well, what if you combined Siri’s conversation with a little of your own online history. What if Siri could track and analyze all your calls, text messages, searches, etc. and start making recommendations to you? Could it give valuable advice and tell you what or who to avoid?

Having a relationship with your computer – it’s not that far fetched or far off. Frankly, most men could use a woman who listens to them, speaks kindly, and offers friendly advice. The question is – will some of the flesh and blood women in our lives (wives and girlfriends) start feeling that we’re cheating on them with ‘someone’ else?

As technology gets more sophisticated and gets more in sync with our emotional lives, it has the potential of both helping us or harming us. In the words of Alfred North Whitehaed, the British mathematician and philosopher, “It is the business of the future to be dangerous.”